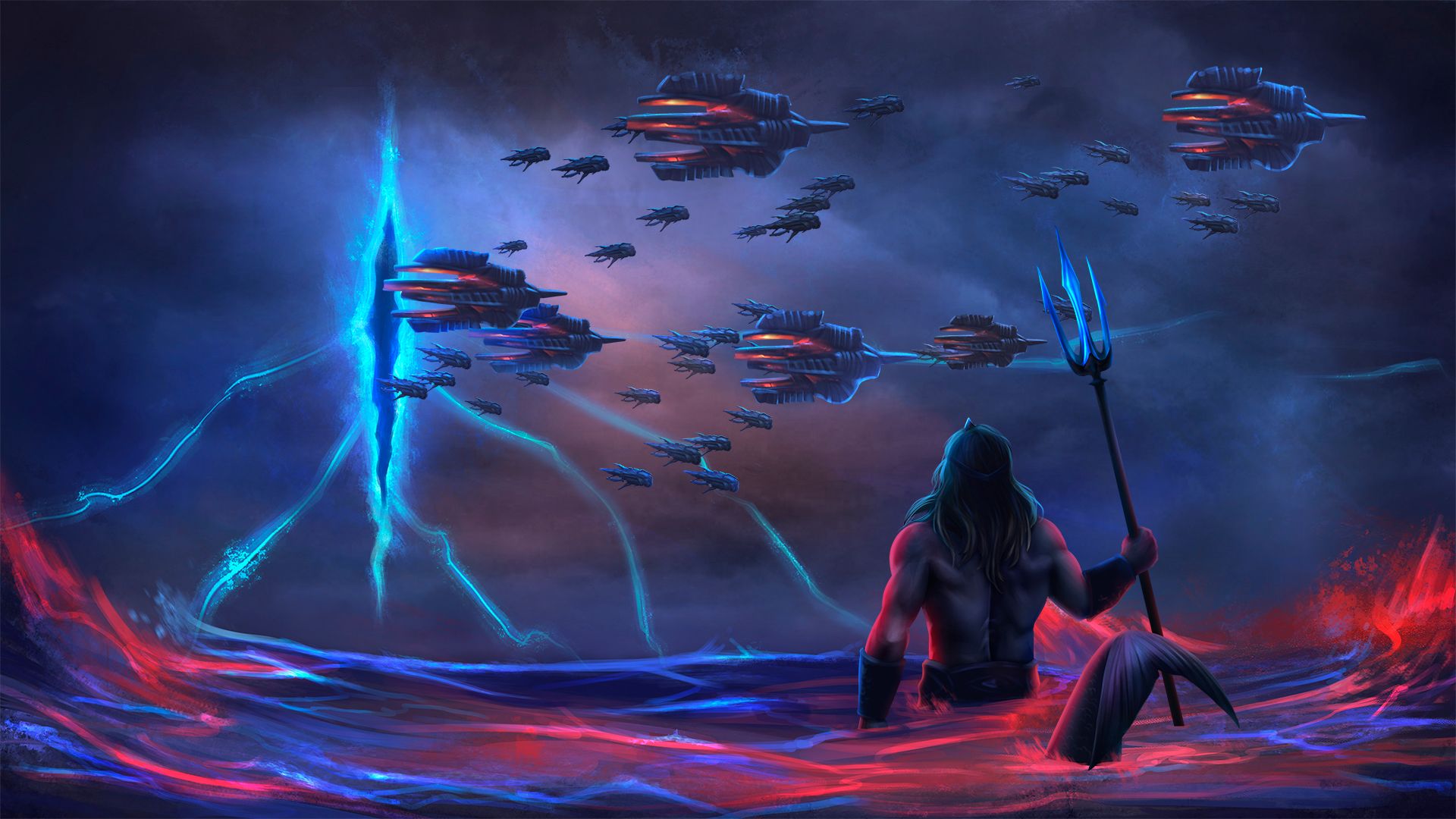 We never saw those beasts coming - How could we have? We spend our entire lives underwater, with no worry for what the sky has to offer. When the suns gather close to our water-laden planet, we simply dive deeper. We never even saw The Conjunction… We never saw the Zaiyou.

“My King,” One of my most loyal guards barrelled towards me, barely stopping in front of me, “Something has come” He pointed up with his weapon. As I stared through the water, I saw what he was pointing at. It was a rip in the sky itself, and through it poured Hell itself: The Zaiyou.

When they came through that tear in space, they did so with the might and rage that comes from a recently-won battle. They had no idea what they were rushing into, but it turned out that we were their perfect enemy. They landed on what they thought was a barren planet and began terraforming the small continent they landed on. We quickly sank the entire continent and stopped their efforts, but neither opponent could approach the other. Their radiant heat scorched our skin, and we made their fire turn to steam. We found ourselves at a near-immediate stalemate, and that infuriated the Zaiyou.

Both sides quickly racked their brains - The Zaiyou on how to break us, and we on how to defend ourselves. The former chose to create suits that made them impervious to the water’s cooling effects while we created a device powerful enough to send a signal through numerous galaxies. As the Zaiyou descended into the water, I sent a signal for help to deep space with no promise of help. With that, the true war began.

The Zaiyou were slow in the water, which gave us an immediate advantage. A wave of them were slaughtered at the hands of me and my army. They quickly adapted in the face of war, though… Perhaps that is their greatest feat; war. They would soon find out how frail our bodies are as they began to compensate for the weight of the water. Their blades didn’t cut through us. No… They didn’t bother sharpening their weapons, didn’t bother giving us a clean, honorable death. Their blades destroyed our bodies, shattered our bones, and ripped through us. The cries of my people still haunt me to this day.

It was in our darkest hour, after thousands of my people had been massacred, that our cry for help was answered. The Macros, with their advanced technology, found our signal the fastest. They came through the same tear the Zaiyou did with a rage of their own. This was not the rage of victory though. No… It was something far worse - The vengefulness of loss.

They were far more prepared for the Zaiyou than they were on Tyr. They ripped through them with no mercy, forcing them to flee from Wassen. To this day, this battle is one of the only that the Zaiyou have lost… The monsters. Through all the mindless slaughter, an alliance was formed between my people and the Macros and, in the settling smoke left behind by the war, I found myself amongst strange company.

In their frantic fleeing, the Zaiyou had left behind one of their own. This was an accident on their part, but far from accidental on the part of the newly alone. He seemed… frightened. I was sympathetic to his situation. After all, my ancestors were once aliens to this planet, forced to abandon their home and seek refuge elsewhere. He told me his name was Korask and asked for a ship. I granted him one in hopes he could find a better life - Something more than the brutish nature of the Zaiyou.

As he left the atmosphere of my planet, the Macros followed him. We were once again alone on Wassen. We were not broken, but our waters were certainly bloodied. At this moment I vowed never to allow my people to be slaughtered again. We would help in this war any way we could - We would end this conquest of fire and flame with our lives if necessary. I will extinguish the Zaiyou.